Longacre Held with No Bond on Murder Charge 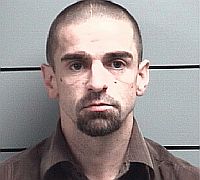 A Plymouth man will appear in Marshall Superior Court I on Tuesday afternoon for his initial hearing on a felony charge of Murder along with a level 4 felony charge of arson and a class A misdemeanor of Resisting Law Enforcement.

35 year old Duane Longacer was officially charged following an event on Sunday morning, June 28th that took the life of a Plymouth woman.  According to court documents Longacre allegedly struck and stabbed Jill McCarty with a machete in a home in the 900 block of North Plum Street just after 9 a.m. Sunday.

Longacre attempted to flee from police by exiting the home through the rear door.  He struggled with police and was then tased before being handcuffed.

Emergency responders noticed smoking coming from inside the home and called the Plymouth Fire Department to the scene.  After getting the fire under control firefighters entered the home and located a deceased female determined to be Jill McCarty in the bathtub.

Another male in the home at the time of the incident told police that Longacre hit McCarty in the back of the head with a machete and then hit her in the side of the neck and then once more in the neck.  Longacre then dragged her body to the restroom and placed her in the bathtub.

When investigators search the residence they located a pool of blood near McCarty’s bed and bloody drag marks from the bedroom to the bathroom.

Duane Longacre was interviewed by police in the Marshall County Jail where he admitted to dragging McCarty into the bathroom and told them he was trying to put pressure on her wounds.  Longacre did not admit to killing Jill McCarty and told police she was “evil and had put a bounty on his head and there were teams out to kill him.”

Currently Duane Longacre is being held in the County Jail with NO BOND.