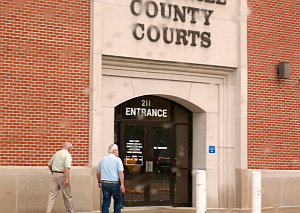 The Marshall County Prosecutor’s Office announced the sentencing Robert Sumpter, 32, with a Plymouth address, to six years imprisonment at the Indiana Department of Corrections, with no time suspended. The sentence imposed by Judge Robert O. Bowen of Marshall Superior Court 1 included an order for sex offender treatment followed by sex offender terms upon release and reintegration into society. Six years is the maximum.

Sumpter had previously pleaded guilty to Count I, Failure to Register as a Sex Offender with a Prior Conviction, a Level 5 felony. A lower level felony of Failure of a Sex Offender to possess identification was dismissed as the only part of a plea agreement. After reviewing Sumpters background and previous history, and in light of the facts of the case, Deputy Prosecutor Lynn Berndt argued for, and Judge Bowen agreed, to a maximum sentence.

Prosecuting Attorney Nelson Chipman expressed approval imposition of the maximum sentence of 6 years with no time suspended. “Mr. Sumpter’s prior convictions certainly warranted the maximum. He cannot be trusted in civil society. We are all grateful to the investigating officers’ diligence, and their use of the latest technology to track Sumpter’s activities on social media platforms.”

The case began in February, 2019 when Bremen PD Officer Nick Young obtained information from a cyber tip line managed by the Indiana Internet Crimes Against Children Task Force. The information alerted Officer Young that an adult male identified as Sumpter was engaging in inappropriate communication with a 13 year old girl through Facebook. The information revealed that Sumpter used at least three different Facebook profiles of himself to communicate with others.

Detective Sergeant Jeffrey Snyder of the Marshall County Sheriff’s Department was given the cyber information and was able to immediately track Sumpter to the Economy Inn in Plymouth. That address was different from the address Sumpter used on his identification card issued by the Bureau of Motor Vehicles.
The inconsistent and out of date address information for an individual on the sex offender registry is itself a crime. Moreover, subsequent investigation revealed Sumpter’s concealment of the extent of his use of Facebook accounts, which is an offense as well. During his interrogation by Detective Snyder, Sumpter admitted his awareness of the requirements of updating registry information, as well as full disclosure of the use of social media. With a prior conviction of Sexual Misconduct with a Minor nine years ago, and Sexual Battery four years ago, together with a more recent conviction of Failure to Register as a Sex Offender, any defense argument that “I did not know……” fell on deaf ears. Sumpter has been in custody since February 5, 2019.

Chipman added “the maximum sentence was clearly justified in this case. He will get out some day though, and we will need to remain vigilant monitoring his activities. I know we will be with skilled and dedicated officers of the caliber of Det Snyder and Officer Young.”