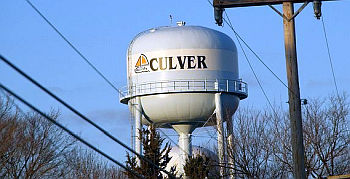 The Culver Union Township Fire Department is pleased to announce that the aerial truck fundraiser is complete! Thanks to the generous support of 166 individuals, families, businesses, and organizations in our community, we have already received over $150,000 in donations, with another $80,000 in pledges to be collected over the next four years, giving us a total of over $235,000 raised!

Fundraising efforts officially started in September 2018, but one on one discussion with interested partners began even earlier with that. Discussions started in early 2018 about the benefits of having an aerial fire truck in the Culver Union Township Fire Department fleet of vehicles with local businesses, residents, and organizations.

Town and township officials decided in fall of 2018 to begin a fundraising campaign to purchase an aerial fire truck to replace the 1993 pumper truck. The group eventually settled on the purchase of a Rosenbauer 100’ Low Profile Viper Aerial Truck, which was ordered in March of 2019. The truck is currently under construction in Minnesota and is expected to arrive here in Culver and be brought in to use this summer.

On behalf of town staff, elected officials, and the fire department, we offer a very sincere thank you to the many residents, businesses, families, and organizations who generously contributed to this effort. According to Jonathan Leist, town manager, “This fundraiser was another great example of what we can accomplish when we all work together—town residents, summer residents, Culver Academies, township residents, and residents on the lake.” We look forward to doing an open house for everyone to come see the new truck this summer!