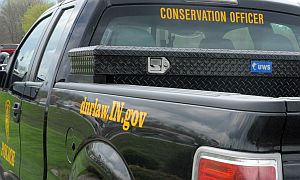 (Argos) Indiana Conservation Officers’ investigation of the thefts of animal parts and hides by a former local taxidermist that occurred as early as 2011 have resulted in the arrest of a suspect.

Cody Leed, 45, of Plymouth, was arrested February 28th on warrants through Marshall County for eight misdemeanor charges of theft, one felony theft charge, and one felony charge of corrupt business influence.

In December 2019, DNR Law Enforcement was notified that a local taxidermist had received animal parts and payments for services that were never returned or refunded, and told that the taxidermist had since dissolved his business but continued to maintain possession of the animal parts.

Conservation Officers have identified multiple victims in the case, and seek additional victims.