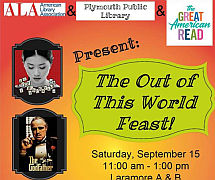 Five literary worlds were chosen to be represented at the “Out of This World Feast,” which include:  Alice in Wonderland, The Joy Luck Club, The Godfather, Game of Thrones, and Pride and Prejudice.

Each literary world will showcase free food samplings and photo opportunities for all who participate that day.  At the end of the taste testing, patrons will be asked to vote on which world’s cuisine they liked the best.

“It was hard to pick just five!” said Nathan Mayer, Adult Circulation Supervisor at Plymouth Public Library.  “There were 100 books on the Great American Read booklist, but I think we narrowed it down to five interesting choices,” he said.

Plymouth Public Library was 1 of only 50 libraries across the nation to receive a grant from PBS and ALA to participate in The Great American Read, an eight-part television series that explores and celebrates the power of reading. Told through America’s 100 best-loved novels (as chosen in a national survey), the series is comprised of a two-hour launch episode in which the list of 100 books is revealed. Five one-hour theme episodes will follow and examine concepts common to groups of books on the list. The finale will then announce the results of a nationwide vote to choose America’s best-loved book.  The series is the centerpiece of an ambitious multi-platform digital, educational, and community outreach campaign that is designed to get the country reading and talking passionately about books.