U.S. Senator Joe Donnelly welcomed home hundreds of Vietnam War veterans from across Indiana as part of National Vietnam War Veterans Day ceremony at Plainfield High School Thursday night. The event was also attended by Gold Star Families, veterans organizations, veterans of other eras, Vietnam veterans’ families, and friends and members of the community. The keynote speaker was Kent Laudeman from South Bend, a Vietnam War and Gulf War veteran. Laudeman served in the U.S. Army for over 20 years, and currently serves as the Director of the Robert L. Miller Sr. Veteran’s Center for Homeless Veterans in South Bend. Other ceremony participants included Chaplain Lonnie Sutterfield from Roudebush VA Medical Center in Indianapolis, the Indiana chapter of the Rolling Thunder, members of the Gordon Pipers, and members of the Indiana National Guard 38th Infantry Division Band. 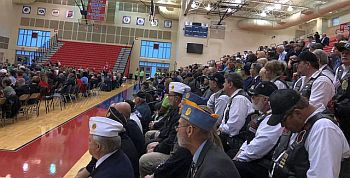 Donnelly said, “I was proud to host this event on National Vietnam War Veterans Day to honor the service of our Hoosier Vietnam War veterans and give them the welcome home they deserve and should have received when they returned home from serving our country. Vietnam War veterans answered their nation’s call and served with courage, conviction, and a sense of duty. Our veterans and their families have made incredible sacrifices, and for that we cannot thank them enough.”

Laudeman said, in part, in his remarks at the event, “Senator Donnelly…thanks for what you do in Congress to support Vietnam veterans, all veterans who served between 1955 and 1975…As a Vietnam vet, it has taken me forty-five years to get to this point and be proud to have served…Fifty years later, Senator Donnelly and others are helping with this special day of recognition…Vietnam vets… accepted the mission, you did not falter, you fought for the red while and blue, while all gave some and some gave all.”