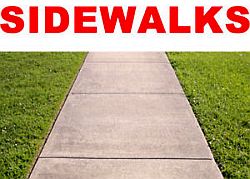 Plymouth Street Superintendent Jim Marquardt presented members of the Board of Public Works and Safety with a small incomplete list of projects for this year’s ADA Sidewalk Transition Plan.

Projects to begin this year’s sidewalk improvement season will include the flood damaged sidewalk on East Jefferson Street, just east of the bridge on the south side.  Cost estimate for this section is $1,225.50.

One more project was added to this 2018 list, Randolph and Berkley Street, the southwest corner to finish off the intersection to bring it up to ADA compliance at a cost of $9,405.75

Total cost is expected to be $21,560 for man hours and materials.

The Street Superintendent told the Board of Public Works that representatives from MACOG (Michiana Area Council of Governments) will be coming down to assist with updating the ADA Transition Plan.

The Board of Public Works and Safety approved the plan as presented realizing more projects will be added to the plan this summer.