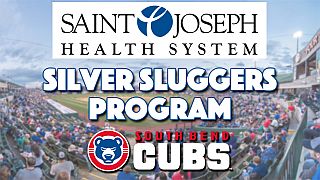 For the third consecutive year in a row, the South Bend Cubs and Saint Joseph Health System(SJHS) have joined forces by presenting the Silver Sluggers Program 2018, a triple play for seniors in our community. The program offers special ticket pricing and programming for participating seniors. SJHS St. Paul’s is also taking special measures for its residents by inviting two South Bend Cubs players to live with at the Life Plan Community for the third season in a row.

“There is no deeper love for the game than in our senior community,” said Joe Hart, president of the South Bend Cubs. “Giving them an opportunity to fuel their passion for America’s favorite pastime is something we are excited to do again this year.”

The Silver Sluggers program will offer a special ticket discount for any senior 55 years old or older. This discounted price will be $6 for a field box ticket – a 45-percent discount off the normal ticket price – at every Wednesday home game this season, beginning April 19.

But baseball isn’t just fun and games for seniors. “Studies continue to show that social interaction and connections have health benefits,” noted Shari Binkley, executive director, St. Paul’s. “According to the National Institute on Aging, lack of social interaction is consistently associated with biomarkers of health, including risk factors for disease such as Alzheimer’s, osteoporosis, rheumatoid arthritis, cardiovascular disease and some forms of cancer.”

Seniors attending South Bend Cubs games as part of the Silver Sluggers program will be seated in a “Friendship Section,” where they will have the opportunity to meet with old friends and make new ones. In addition, attending seniors and other fans can also participate in health screenings, free of charge, provided by SJHS. At each Wednesday home game, one Silver Sluggers participant will be selected to throw out the ceremonial first pitch.

About the South Bend Cubs

The South Bend Cubs are the Class A minor league affiliate of the World Series Champion Chicago Cubs. Over the past 29 seasons, the team has won five Midwest League titles, most recently in 2005, and has captured 12 division titles. In 2015, the team was named Ballpark Digest’s Team of the Year and received the John H. Johnson President’s Award, the highest award in minor league baseball. The team is owned and operated by Swing-Batter-Swing, LLC whose sole shareholder is Andrew T. Berlin of Chicago, Ill.