Mark Jackson Sentenced to 12 Years for Possession of Heroin 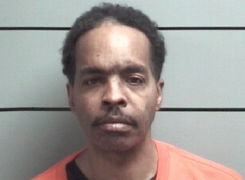 Mark Jackson, 54, of Chicago, Illinois, was sentenced on March 28, 2018 in Marshall Superior Court No. 1 to twelve years imprisonment at the Indiana Department of Correction for Possession of a Narcotic Drug, specifically Heroin as a Level 4 Felony.  No part of the sentence was suspended.  Judge Robert O. Bowen approved an agreement between Chief Deputy Prosecuting Attorney Tami Napier and defense attorney Tom Black.

In open court, Jackson admitted that in February of 2017, Deputy Brandon Cooper of the Marshall County Sheriff’s Department stopped a vehicle for speeding driven by Jesse Boykins at 1:40am on U.S. 30 and Rose Road.  Jackson was a passenger in the vehicle.  Deputy Cooper immediately noted the smell of burnt marijuana and conducted a search of the vehicle which revealed a black bag that contained, among other items, approximately 14.4 grams of heroin.  Subsequent lab testing confirmed the substance was indeed heroin.   In exchange for a guilty plea, the State dismissed the remaining charges also alleged in this case.

Jackson is a lifelong resident of Chicago, Illinois and was returning to Illinois with Boykins at the time of Deputy Cooper’s traffic stop.

Prosecuting Attorney Nelson Chipman was pleased with the outstanding work of Deputy Cooper in the investigation.  Chipman stated that the movement of hard core drugs through Marshall County is an ever-present problem facing law enforcement.  So much of a problem my office sponsored interdiction training by a national expert that is being held this week at Christo’s Banquet Center.

“Heroin and other opiate drugs are headline news nearly every day in our state and nation.  Opiate abuse destroys families, futures and communities.  The prosecution of drug-related dealing and possession in Marshall County is a priority in my office and will remain so until it is clear to sellers and users that it will simply not be tolerated in our community.”