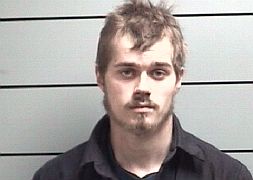 On Monday, March 26, at approximately 10:30 at night, the Marshall County Sheriff`s Department received a call of an auto accident involving a semi, in the area of US 6 and State Road 106 (west), near Bremen.  County Officer Kerry Brouyette responded to the call and started investigating the auto accident.  It was found that a silver passenger car with extensive damage to the passenger side of the vehicle had fled the scene.

Marshall County Sergeant Les McFarland with the Sheriff’s Department went to the traffic stop location and spoke with the driver of the vehicle, identified as 19 year old Landon James DeWitt of Argos.

It was believed that DeWitt was impaired and Landon was taken to a hospital for a chemical test.  He was then arrested for Operating While Intoxicated and Leaving the Scene of a Property Damage Accident.