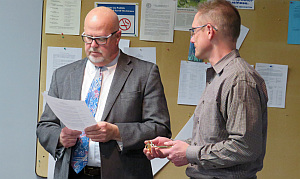 Mayor Senter said, “Shawn’s conscientious decision making has always brought a great attitude and energy to the process of local legislation.  He is a quiet leader and truly represented his district in a distinct and admirable way.”

The proclamation stated that former councilman Shawn Grobe has earned the admiration and high regard with those of whom he has come in contact, and the affection of fellow public servants, who are proud to call him “friend”.

Mayor Senter presented the Key to the City of Plymouth to Shawn Grobe for his many years of service and wished Shawn and his family the best in all of their future endeavors.