North Judson Teen Arrested for Meth, Illegal Consumption and Driving Without a License 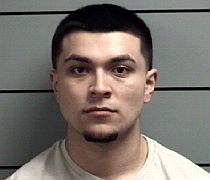 Saturday night, March 24th, just before midnight, Marshall County Officer Wozniak was sitting at the traffic signal on US 30 at Queen Road.  A black 2005 Chevrolet truck blew the red-light and the officer initiated a traffic stop.

The driver of the vehicle, 18 year old Marcos Ulloa of North Judson was found to be a minor under the influence of alcohol and was operating without ever receiving a driver`s license.

Ulloa was taken to the Marshall County Jail, where a baggie with methamphetamine residue was located on his person.  He was processed for Possession of Methamphetamine, Operating a vehicle Without ever receiving a Driver`s License and Illegal Consumption of an Alcoholic Beverage.