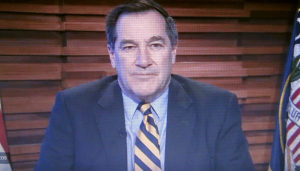 A number of measures that U.S. Senator Joe Donnelly has either introduced or supported to combat the opioid abuse epidemic were signed into law by President Trump Friday as part of the bipartisan government funding bill. The law includes funds to support the addiction treatment workforce through National Health Service Corps, which Donnelly advocated for a part of his Strengthening the Addiction Treatment Workforce Act, bipartisan legislation he introduced with Senator Lisa Murkowski (R-AK). That funding will help recruit more substance use disorder providers to serve in underserved communities.

The law includes $4 billion in funds for grants to states this year to combat the epidemic through prevention, treatment and recovery programs, which Donnelly has repeatedly supported, including in last month’s bipartisan budget agreement.

Donnelly said yesterday, “This bipartisan funding bill has needed resources to help bring more treatment providers to underserved communities in Indiana and across the country. Additionally, this bill includes billions of dollars for states to fight the opioid abuse epidemic through prevention, treatment, and recovery efforts. I’m proud that these necessary funds were included, and I will continue fighting for the resources needed to combat this public health crisis.”

The law also includes dedicated funding for addressing the opioid epidemic in rural America through the Rural Health and Safety Education Program and the Telemedicine and Distance Learning Services program, both of which are part of Donnelly’s bipartisan legislative package, introduced last summer, to combat opioid abuse in rural and ag communities.

Other Donnelly-supported items signed into law in the funding bill:

o   Donnelly’s bipartisan legislation with Senator Fischer (R-NE) will provide farmers with greater certainty by reinstating the status quo for the Comprehensive Environmental Response, Compensation, and Liability Act (CERCLA) reporting that farmers have been operating under since EPA’s 2008 final rule;

o   A fix to the “grain glitch” in the McConnell-Ryan tax bill, which was putting family businesses at risk of going out of business. The fix restores a level playing field for grain buyers;

o   Funding for rural water and waste water grants; and

o   Investments for continued development and implementation of rural broadband.

o   Funding for the Prompt Global Strike Capability Development and Hypersonics Development programs, both of which Donnelly has advocated for in his role as Ranking Member of the Senate Armed Services Strategic Forces Subcommittee; and

o   Funding to support the Office of Terrorism and Financial Intelligence at the Department of Treasury, which is responsible for combating illicit financing of numerous nations including North Korea.

o   The Stop School Violence Act, which will provide grants to school systems for increased safety measures including security and violence prevention trainings, increased coordination with law enforcement, equipment, and technology; and

o   A measure affirming the Centers for Disease Control and Prevention’s (CDC) authority to research the causes of gun violence.