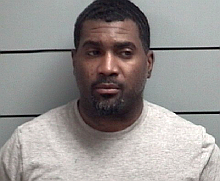 On Thursday, March 22nd, at 8:22 PM, Marshall County Officer Wozniak was on US 30 between King Road and Iris Road and witnessed a white 2007 Chevrolet passenger car traveling at 106 MPH in a posted 60 MPH zone.  The vehicle was slowed by a red traffic light at King Road, at which point the officer initiated a traffic stop.

The driver of the vehicle, 38 year old Raphael A. Newkirk of Illinois, was taken into custody for reckless driving.  During the investigation, Newkirk was found to be in possession of marijuana.  It was also determined that he was under the influence of alcohol and a controlled substance.