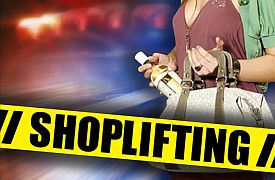 On Monday March 19, Plymouth Police Officers were called to Walmart for a theft.

Officers Beatty and Gilmer were on scene before the suspect left the store. Police officers along with Walmart’s Assist Protection stopped 34 year old Donielle Good of Argos after she had passed all points of purchase.

Officer Beatty placed Good into custody and transported her to the Marshall County Jail.  She was booked for Theft and her bail was double and set at $1500 for pending charges.