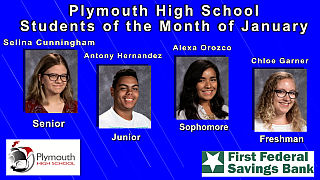 During the PHS monthly positive school award ceremony on March 20, several students were recognized for helping to create a positive environment, having perfect attendance or their educational growth.

Selina Cunningham was elected Student of the Month for January.  Selina was nominated by Ms. Jane Faulstich who said, “Selina is everyone’s biggest fan. Every single day, I see her and hear her showering kindness toward other students. She has kind, uplifting words to say to students (that she doesn’t even know) in the hallways. She is always smiling, always encouraging her classmates in Acting class, and I feel good being anywhere near her. Her wonderful daily attitude toward all at PHS is outstanding.”

Antony Hernandez was voted by PHS staff as the junior of the Month for January. Antony was nominated by Ms. Judi Lykowski who said, “Antony, a new student in Radio/TV is extremely quick to volunteer and I truly appreciate his efforts already. The day of Mr. Delp’s organized freshmen “ one-word” video shoot – one of our four student camera operators backed out -right away with no hesitation Antony volunteered and did a great job. He also volunteered to take pictures at a January wrestling match for social media for PCSC marketing, covered the athletic signing of Jeff Oliver and has already made his on-camera debut on PTV hosting our 1 Minute 1-on-1 segment that features a PHS student-athlete. Thank you, Antony, for your efforts and willingness to help already. We appreciate you! ”

Alexa Orozco was selected by the PHS administration and teachers as the PHS senior of the Month of January.  Alexa was nominated by PHS Science Teacher Mr. Jeff Kindelan who said, “Alexa is an awesome student! She works with another student who has some language deficiencies and makes sure that the student understands the work.”
January Freshman of the Month: Chloe Garner

Chloe Garner was selected by the PHS administration and teachers as the PHS freshman of the Month of January. She was nominated by PHS Social Studies Teacher Mr. David Hatcher.  Hatcher said, “Chloe was one of only two students to ace the renaissance and reformation test. Great Job, I’m very proud of you Chloe!