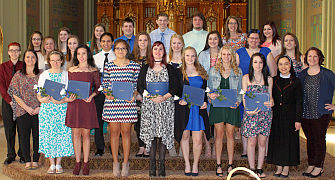 Though many were not present at the ceremony, this was a record-breaking year for Ancilla College. “Ancilla College was the only PTK chapter in Indiana to meet the enrollment requirement to qualify for REACH rewards,” said Jodie Bowers, who serves as the chapter’s co-advisor alongside Academic Advisor Kristin Rust. According to the PTK website, “The REACH Rewards program encourages membership by rewarding chapters who achieve or exceed 15 percent for their membership acceptance rate.”

The Board of Directors of Ancilla College also lent a hand by collecting funds in order to help the students cover the cost of participationin PTK. “We would like to recognize and thank the board members for supporting our program,” said Kristin Rust.

To be eligible for membership a student must complete a minimum of twelve hours of associate degree course work and generally earn a grade point average of 3.5 or higher. Students must maintain a high academic standing throughout their enrollment in the two-year college, generally a 3.25 GPA.

Ancilla College (www.ancilla.edu), part of The Center at Donaldson, offers 26 associate degrees, several one-year certificates and has 12 athletic teams. Since 1937, the college has been a sponsored ministry of the Poor Handmaids of Jesus Christ. It is a small, private, liberal arts school located two miles south of U.S. 30 on Union Road near Plymouth, Indiana.