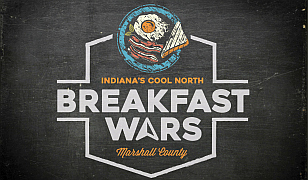 The votes have been counted to find the best breakfast in Indiana’s Cool North. Over the past ten days, Northern Indiana residents and visitors have been voting in each of the seven county‘s Breakfast Wars to find the best breakfast spot in that county. Monday Marshall County Tourism announced their county’s Breakfast Wars champion, Castaways! Castaways will now move on to the regional final to compete alongside the six other county winners, to see who will be crowned best Breakfast in Indiana’s Cool North. We would like to congratulate and thank all the participating restaurants!

In 2015, Wooden Peel in Bremen bought home the Northern Indiana Pizza Wars Title, in 2017 Mila’s Mini Market won the Northern Indiana Taco Wars title, can we bring it home a third time in Breakfast Wars? We think so! Be sure to vote in the regional round which will begin Friday March 16 at 10:00am EST, and will be hosted at the regional website IndianasCoolNorth.com/BreakfastWars. The regional round lasts ten days and on March 26 at noon we will all know who has been voted Best Breakfast in Indiana’s Cool North.

The seven winning restaurants that will vie for Best Breakfast in Indiana’s Cool North are the following: Castaways in Plymouth, Jennie Rae’s Restaurant in Rolling Prairie, Country Corral Restaurant in Shipshewana, Macadoo’s Family Restaurant in Mishawaka, The Golden Egg Pancake House in Elkhart, American Table Restaurant in Warsaw, and Northside Diner in Chesterton.