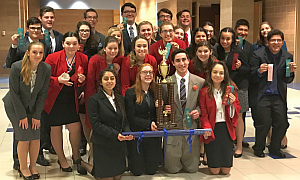 The Plymouth High School Speech Team continued their storied history by taking 2nd place in the IHSFA Speech State Tournament in Class AA. The team also finished 4th in the state in the overall team sweepstakes, only losing to Munster, Chesterton, and Fishers. Since the inception of the team in 1979 Plymouth has only finished out of the top 5 in the state once.

Leading the way for Plymouth were juniors Jacob Moreno who finished 6th in Humorous Interpretation and Bridget Schafer who finished 2nd in Original Oratory.

Plymouth started the tournament with 35 entries after winning their 37th consecutive sectional title dating back to 1982. Currently, this is the longest streak of sectional victories in the state. The team has only 2 head coaches, Dan Tyree from 1979 – 2000 and Dave McKenzie from 2001- present time. Currently Tyree is an assistant for McKenzie.

The team has also had success in the National Speech and Debate Association (NSDA) Tournaments. Students qualifying for the NSDA National Tournament this June in Ft. Lauderdale, Florida include Trent McKenzie, Nicole Keller, and Kelsey Kruyer in Congress, Madison Smith and Katy Smith in Humorous, Ryley Tostevin in Drama, Edgar Garcia in Informative, Lexi Ramirez in POI, and Levy Crawford and Trevor Pletcher in Duo.

Corporate Sponsor, John Oliver of US Granules, continues to support the Plymouth Speech and Debate team through a fund for capital expenses in the Marshall County Community Foundation.