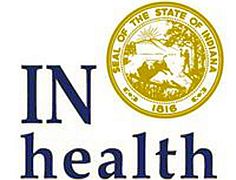 The American Cancer Society estimates that nearly 3,200 Hoosiers will be diagnosed with colorectal cancer and an estimated 1,100 will die as a result of the disease this year. Screening and early detection can save lives, and screening does not have to be expensive or uncomfortable, according to the Centers for Disease Control and Prevention (CDC).

March is National Colorectal Cancer Awareness Month, and the Indiana State Department of Health (ISDH) is urging Hoosiers to get regular screenings and make healthy lifestyle choices to reduce their risks of developing the disease, which is the third-most commonly diagnosed cancer among both men and women in Indiana.

“Almost all colorectal cancers begin as precancerous polyps, which often don’t cause any symptoms,” said State Health Commissioner Kris Box, M.D., FACOG. “A variety of screening test options are available to find precancerous polyps so they can be removed before they have a chance to turn into cancer, sparing individuals and their families the devastating effects of this disease.”

The U.S. Preventive Services Task Force recommends that adults age 50-75 be screened for colorectal cancer. Several screening tests can be used to find polyps or colorectal cancer, including stool tests, sigmoidoscopy, colonoscopy and colonography. According to the Indiana Behavioral Risk Factor Surveillance System, in 2016, only 64.6 percent of Hoosiers age 50-75 had a colonoscopy, sigmoidoscopy or blood stool test within the appropriate time frame.

The two greatest risk factors for developing colorectal cancer are gender and age. More than half of Indiana’s cases from 2011 to 2015 were diagnosed in men, and nearly 90 percent of those cases were in residents age 50 and older. Other risk factors include race, personal or family history of colorectal cancer or polyps, a personal history of chronic inflammatory bowel disease, certain inherited genetic conditions such as Lynch syndrome and being diagnosed with type 2 diabetes. In addition, being overweight or obese, not getting enough exercise, eating a diet high in red or processed meat and drinking alcohol have been found to increase risk.

For more information about colorectal cancer in Indiana, visit the ISDH’s website at in.gov/isdh/24969.htm or the Indiana Cancer Consortium at indianacancer.org.