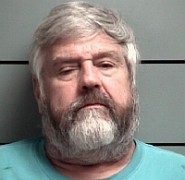 Jim Irwin, 69 of Plymouth plead guilty to two counts in Marshall Superior Court I Wednesday morning and after nearly 30 minutes of discussion Judge Robert Bowen accepted the plea and sentencing.

Chipman said, “In 2017, three females came forward with accusation and agreed to assist the Marshall County Drug Task Force and Indiana State Police in an undercover investigation of the defendant.”   He said one female agreed to wear video and audio devices that would document her interaction with Irwin.

On August 17th, 2017 that undercover female who was seeking assistance from Care and Share went to Irwin’s home on Charles Street in Plymouth, after being invited there.  He asked her to engage in sexual acts with him in exchange for money and Norco pill, which are a Scheduled II Controlled Substance.  Irwin was nude throughout the transaction and the undercover woman did not act on his requests to touch him.

Prosecutor Chipman said, “The defendant exploited his role with Care and Share to prey on, sexually violate and victimize women who were already in vulnerable circumstances, both physically in terms of dependence on illegal narcotics, and financially in terms of an immediate and dire need for room and board.”

In the plea agreement Irwin plead guilty to Count 1 Dealing in a Scheduled II Controlled Substance as a level 6 felony.  He also pleads guilty to Count 8 Patronizing a Prostitute as a class A misdemeanor.  Counts two through seven were dismissed.  Sentencing in the plea was 2 years in Community Corrections for the felony and 1 year in Community Corrections for the misdemeanor, with sentences to be concurrent.

Irwin was given credit for time served which totaled 72 days.

Judge Bowen approved the plea, although the request for an unlimited travel permit to and from Indianapolis to visit family was restricted to having the judge’s approval for each trip.

Another stipulation of the plea agreement requires Irwin to undergo screening to determine if sex offender treatment is necessary and appropriate.  Irwin’s attorney did tell the court his client is currently undergoing counseling.

Jim Irwin told the judge and those family members, friends and pastors in the court room, “I’m not a fool, I’ve done foolish things and August 17th was one of those days I will regret it forever.”

Judge Bowen told Irwin that he had violated the public’s trust and he wanted to make it clear to him that if he violates the plea agreement he would be placed in jail for the term of his sentence.

Irwin’s attorney said his client acknowledges he made mistakes and he intends to prove to the court by his actions that he has learned by his mistakes.  He said their intention is to come before the judge after he proves himself to the court and seek a reduction from the level 6 felony to a misdemeanor.  He continued that Jim Irwin has been a law abiding citizen for many years and he intends to prove that through his actions.