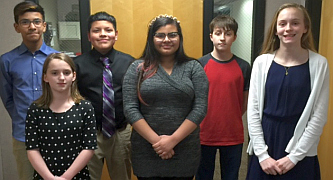 Bird said, “They are always telling us we broke the mold.” The students then spoke about brainstorming ideas for a pep assembly along with game ideas for Spirit Days. Using Olympics games as a model, the students worked through a constructive response challenge to bring about more school spirit.

According to Shafer, both Assistant Principal Craig Hopple and Principal Reid Gault say the positive assembly will now be a requirement every year.

Another portion of their presentation showed how they used what they called “The Geography of Happiness” to help all students.