Culver Teen Charged with 19 Misdemeanors from Thefts from Vehicles 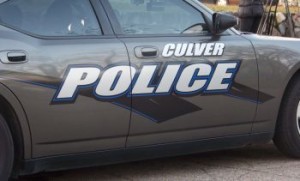 On the early morning hours of January 11th, the Culver Police department was contacted by a resident in the 300 block of South Slate Street who reported that two of their vehicles had been entered into during the nighttime hours.

Throughout the day of January 11th the Culver Police Department continued to receive additional reports from vehicle owners in the area of South Slate and West Madison Streets, reporting multiple vehicles had been entered into and items taken from within the vehicle.

The investigation continued into the following day, where Culver Police were able to recover several stolen items which had been taken from the victims’ vehicles. Also during the recovery of the stolen property, officers located marijuana and drug paraphernalia.

On January 12th, Alan Dilts, 18, of Culver was arrested and incarcerated in the Marshall County Jail.  An affidavit of probable cause was filed with Marshall Superior Court and Dilts was held on a $5,000 cash bond for the charges of Theft, Unauthorized Entry of a Motor Vehicle, Possession of Marijuana and Possession of Paraphernalia.

Further investigation took place for a report of Unauthorized Entry of a Motor Vehicle and Theft, which was originally reported on December 31, 2017 by a vehicle owner in the 400 block of School Street.  An item stolen from this vehicle was also recovered during this investigation.

Several reports were filed with the Marshall County Prosecutor’s Office, who formally charged Dilts with 19 misdemeanor charges including: 9 counts of Theft, 8 counts of Unauthorized Entry of a Motor Vehicle and 1 count of Possession of Marijuana and Paraphernalia.

The Culver Police Department would like to remind residents and visitors to make sure their vehicles are locked and secured.

Information pertaining to this release is based on probable cause to believe the allegation have been committed.  Defendants are presumed innocent until proven guilty within proper court proceeding.