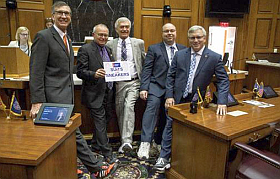 On Tuesday, February 13th Indiana legislators pair sneakers with their suits at the Statehouse in Indianapolis to draw attention to National Cancer Prevention Month. Each year, the Indiana House of Representatives participates in the Suits and Sneakers Challenge, an annual event sponsored by the American Cancer Society and the National Association of Basketball Coaches. According to the Indiana State Department of Health, cancer is the second leading cause of death in Indiana. The Suits and Sneakers Challenge is an effort to raise cancer awareness by highlighting ways to reduce the risk of cancer.

Local State Representatives who participated included State Rep. Jack Jordan a Republican from Bremen, representing House District 17, which includes all of Marshall County and a large portion of Fulton County.