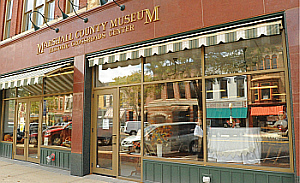 The Marshall County Museum is a busy place according to Linda Rippy, Executive Director.  During Monday’s County Council meeting Rippy gave her quarterly update.  The visitor county for 2017 was 9,751 with 1,737 of those being from outside Marshall County.  She gave members a sheet with several comments from Trip Advisor where visitors of the museum wrote about their experience at the museum.  Comments were from local residents and those as far away as Detroit, Kansas City and Grayling Michigan.

The museum it able to operate Tuesday through Saturday from 10 till 4 with the assistance of their many volunteers.  In 2017 there were a total of 2985 volunteer hours and an additional 2,080 hour of ABLE employees.

The Historical Society purchased a new security camera system for the exterior of the museum.  Rippy said, “There have been several issues with kids getting on our roof and they have done some damage.”  The new cameras will help to identify those who are on the roof or vandalizing the building.