City Police Business at Board of Public Works and Safety Meeting

Quotes were open for two new police vehicles during Monday’s Plymouth Board of Public Works and Safety meeting.  Oliver Ford Lincoln was the only company to supply a quote although the chief did present information on the state bid from National Auto Fleet.

Chief Bacon also asked the Board of Public Works and Safety to approve the promotions of Tim Taberski and Ray West to Sergeants and Ryan Richey and Bob DeLee were promoted to Corporals on the department. 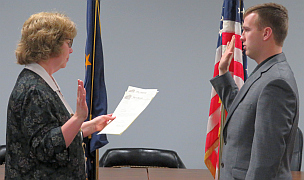 One finale note of business from the Police Department, Chief Bacon said Nicholas Kindig who was sworn into office in January has resigned his position at a police officer.  The Chief asked to offer conditional employment to Jerrid Arnold to fill the vacancy.  Arnold has already been through the police academy and works part-time for the Bristol Police Department.   He will have to pass the physical and psychological testing.  He could be hired as soon as March if he passes testing.