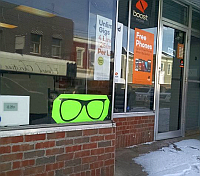 One hundred years ago on February 26, Otis R. Bowen was born in Fulton County. No one knew what the future held for him.

Although Bowen passed away five years ago, the tradition will continue so that future generations will always know of him and his accomplishments.

Bremen Community Cares is proud to announce another celebration of “Bowen Days” this month in Bremen.  At noon on what would’ve been Bowen’s 100th birthday, at least three churches will toll 100 times. The churches include Bremen United Methodist Church, the old St. Paul’s Lutheran Church, and the First United Church of Christ.

Flags will be flown in downtown Bremen the week of Feb. 20th, along with a display of colored portraits by St. Paul’s Lutheran School and Bremen Elementary School students. 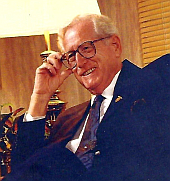 A special birthday party lunch will be held at Community Hospital of Bremen on Friday, the 23rd.  The hospital cafe menu will feature meatloaf, mashed potatoes and baked beans, Doc’s favorite meal, according to his wife, Carol. Free cookies, which Bowen preferred over cake, will be available while supplies last.

The green glasses posters in windows downtown are for awareness/recognition of the “holiday,” too.  Bowen was well-known for his black framed glasses.

At noon on Feb. 26, the town’s proclamation (regarding the establishment of “Doc Bowen Day) will be read aloud at the town hall.