Marcy Prochaska and Joe Martyn Ricke with Special Guest John Bahler to Light Up The Moon This Saturday! 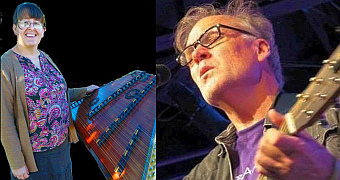 Wild Rose Moon’s first concert of the year features two wonderful performing artists who have both graced our Open Mic Stage.   Each is an accomplished performer and will share their passionate embrace of music through song and story this Saturday, February 17, at 8:00 p.m. Tickets are $10 and $5 for students and veterans. The program is sponsored by REMC’s Operation Roundup.

Marcy Prochaska, Marshall County’s own Hammered Dulcimer Player will be performing on this extraordinary and fascinating instrument.  The hammered dulcimer was extensively used during the Middle Ages in England, France, Italy, Germany, the Netherlands and Spain. Although it had a distinctive name in each country, it was everywhere regarded as a kind of psaltery. The instrument, because it is played with spoon shaped hammers, is considered the forerunner of the piano forte. Many classical musicians, such as Zoltán Kodály, Igor Stravinsky and Pierre Boulez  have composed specifically for the instrument.

Marcy has been doing music as long as she can remember, starting with an old blue upright piano in the basement, on whose black keys she composed her first song, “Horsey Marcy Mole.” Other formative experiences include the wonderful children’s choir program at her church and explorations of such instruments as guitar, harpsichord, recorder, and bowed psaltery. Marcy began playing the captivating hammered dulcimer in her late 20s and has found it to be a comfortable fit for her musical personality and learning style. Her three albums include a variety of folk, sacred, classical, and original music with dulcimer and other acoustic instruments, and she has played for all kinds of events including baptisms, weddings, and other celebrations. She is currently developing as a church organist and substitute choir director at St. Thomas Episcopal Church in downtown Plymouth and pursuing an early childhood Montessori certification.  Marcy has been a frequent guest at Wild Rose Moon’s Open Mic series and has proved a crowd favorite as an accomplished musician and a historian of folk and sacred songs.

Joe Martyn Ricke is a native Texan poet, singer, songwriter, actor, writer, director, and raconteur, in the tradition of native Texas poets, singers, songwriters, actors, writers, directors and raconteurs. His father was the dangerously handsome Charles Ricke of Houston, Texas, a navy vet who could not sing a note, but tried. His mother was the extravagantly-named Juanita Eudora Ricke, would-be poet and sometime palm-reader. Now residing in northeastern Indiana, Joe Martyn teaches Shakespeare, writes approximately a song a day, and eats his weight in tofu every month.

His compelling, poetic songs leave audiences thinking and feeling but rarely sleeping. A song like “Divine Electricity” leaves some folks thinking–“what the hell did I just listen to?” And a song like “Beautiful Eyes” leaves folks feeling that the world is full of some incredible ultimate delight which, unfortunately, might be just out of reach but is still worth singing/howling about anyway(s). When the flow is right, his songs provoke both feelings at the same time. One fellow songwriter says that Joe’s song “Little Clarissa” is “the saddest song ever written.” Taking that as both a compliment and a challenge, Joe is working hard to wrap up the entire t0p (or bottom) ten saddest songs as well.

George Schricker of the Wild Rose Moon says: “Joe’s songs are spirited and melancholic and his lyrics and vocals communicate the story of tough times and heartache, and yet they are infectious. He came onto the Wild Rose Moon’s stage and swept the audience up into his world of yodeling and pathos as if he’d hypnotized them. A powerful talent. You’ll be pleased to catch him!”

Joe’s musical pilgrimage started on the Texas/Mexican border, and he has wandered down a winding but interesting path ever since. He first started writing songs as a pre-teen on Juanita Eudora’s Silvertone banjo, which he still plays. In the years since, he has written hundreds of songs, mostly stories registering the emotional extremes of euphoria and depression, love and loss. In Joe’s musical mythology, “the heartbreaking beautiful world” (“Little Clarissa”) is expressed through poetic lyrics and a high-lonesome performance style moving back and forth between a rich, ragged baritone and Bob Wills-influenced yodeling.

Julia Meek, host of the “Meet the Music” radio show, writes: ” Joe Martyn Ricke is a storyteller in the finest sense of the word, with a poetic flair perfectly adapted to his musical roots. He’s a wicked good multi-instrumentalist, and his easy style and witty intros give way to a compelling solo delivery that will hold a small room, or an entire concert hall spellbound. As a frequent guest on my own live and recorded public radio sound stages, his performances never fail to delight.” (Julia Meek, Producer/Host 89.1 WBOI’s Meet the Music).

An actor and a poet as well, Joe Martyn Ricke’s rare covers of songs by Jackson Browne, Tom Paxton, Jason Isbell, Johnny Cash, Townes Van Zandt, Bob Dylan, or King David the Psalmist are always an attempt to find something new and peculiar and even terrible in other’s words and visions we have tamed by too many hearings.