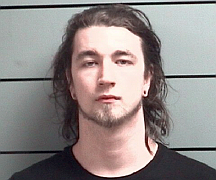 A traffic stop Monday morning, February 12th by County Police Officer Wozniak ended with a Plymouth man being arrested for Possession of Marijuana.

About 2:15 Officer Wozniak stopped a silver 2006 Chrysler 300 in the area of Oak and Hoham Drive.  The vehicle turned into the Walmart parking lot and came to a stop.

The driver of the vehicle, 22 year old Dakota N. Nussel, was taken into custody and booked into the jail on a $500 cash bond for possession of marijuana and possession of paraphernalia.