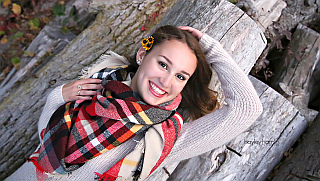 Chickering and 22 other high school senior girls from across the state will represent their local programs as they take the stage at IU Kokomo’s Havens Auditorium. There they will vie for $27,500 in college scholarships and the opportunity to represent Indiana in the national Distinguished Young Woman competition in Mobile, Alabama in June.

The public is invited to attend the preliminary rounds at Haven’s Auditorium on Thursday, February 15 and 16 starting at 7:00 pm.  On Thursday, Chickering will tap dance to “This Ain’t Love” by Jessica Mauboy. Then on Friday, she will perform a fitness routine and answer a self expression question before the preliminary awards are announced. Preliminary winners will advance to Saturday’s 6:00pm finale where the 2018 DWY of Indiana will be awarded.

The program has been offered at Triton for 54 years.

What is Distinguished Young Women?

Founded in 1958 in Mobile, Alabama, Distinguished Young Women is the largest and oldest national scholarship program for high school girls.

The program combines the chance to win college scholarships with a program that offers life skills training to prepare young women for the world after high school. Each year, it makes more than $1.5 billion in scholarships available, and it costs nothing to enter.

The program takes place in all 50 states and Washington, D.C., with some states also having local programs. Young women participate in either their junior or senior year of high school. In Indiana, it’s open to high school seniors.