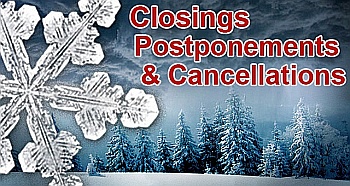 Triton vs LaVille basketball game at Plymouth for tonight has been rescheduled for Saturday night at Plymouth.

Boys Basketball tonight at Bremen with SB Washington has been rescheduled to Saturday.

The VFW in Plymouth is CLOSED

The model trains at the Marshall County Museum will not be running on Saturday due to the weather.

Dickies at Swan Lake is closing due to the weather.

Due to hazardous weather conditions, the ACT test scheduled here at Plymouth High School on Saturday, February 10, 2018 has been canceled.

TOMORROW’S ONE DAY SHOOTOUT AT THE ZONE POSTPONED; MOVED TO SATURDAY FEB. 17