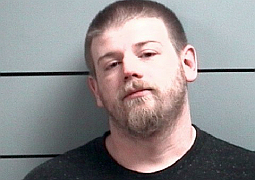 A Plymouth man found hiding in a tree was arrested on Wednesday morning when county police were called to 11065 Hawthorn Road for a physical fight.

About 12:20 Wednesday morning, February 7th the Marshall County Sheriff`s Department received a report of a male and female in an argument and physical fight in Apartment 3.

When Officers arrived on scene they learned that the female subject, had been battered and strangled by her boyfriend, Michael Woodruff 30 of Plymouth. Michael had fled the scene on foot before officers arrived but was later found hiding in a tree near the residence.

Woodruff was taken into custody without incident and was transported to the Marshall County Jail where he was lodged for Domestic Battery and Strangulation and held on a $3,000 cash bond.

The Marshall County Sheriff`s Department was assisted by Bourbon Police.