Plymouth High School is excited to announce eight PHS soloists and three ensemble groups did so well at the ISSMA District contest those students will be advancing to the ISSMA State contest on Saturday, February 17 in Indianapolis at Perry Meridian High School. 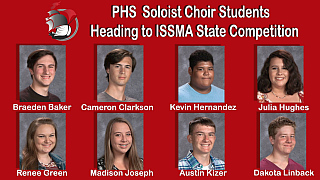 The three ensembles are made up of the 22 PHS students.