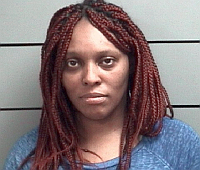 A South Bend woman was arrested for operating while intoxicated and possession of marijuana after she drove herself to the Indiana State Police Bremen Post earlier this week.

On Monday, February 5, around 4:00 p.m., Rosanda Taylor, 33 of South Bend, drove her 1996 Suburban to the Indiana State Police Bremen Post to get a VIN check completed on a purple Chevrolet that she was towing behind the Suburban.

While Trooper Dave Caswell spoke to Taylor inside the post about the VIN check he purportedly could smell the odor of marijuana and he noticed signs of impairment.  Caswell used his K9 partner, Chase, for a free air sniff on the Suburban and Chevrolet. Chase alerted to the odor of narcotics in the Suburban as well as the Chevrolet.

A subsequent search of the Suburban found a partially smoked hand-rolled cigarette of suspected marijuana.  Taylor was arrested on preliminary charges of Possession of Marijuana, B-Misdemeanor, and Operating While Intoxicated, C-Misdemeanor.  Following a blood draw, Taylor was taken to the Marshall County Jail.