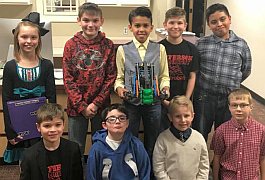 Nine Jefferson Elementary students representing the Jeti Robots Team shared some of the things they learned as they prepared for competition. They said they decided to do research on drones and then put together a four-minute news podcast on the topic. “At first we thought drones were just for spying on others.” they said.

After inviting Plymouth Police Officer Bob DeLee to speak to them, they soon learned that drones are useful in police work. The students explained the drones can be used to help find people after such things as automobile crashes.

Several of the team members are now aspiring to be engineers when they grow up. As they researched, they found that engineers use ethics as they design and drive drones.

The team placed second at the Plymouth competition two weeks ago. They said, “We tried to score the most points using engineering processes. The thinking part was easier than the doing.”

Jefferson Elementary Principal, Angie Mills, credited much of the team’s success to Jen Schindler who works directly with the students. Mills also praised the parents involved for volunteering during the competition.