ISP Investigating the Death of Inmate from Starke County Jail 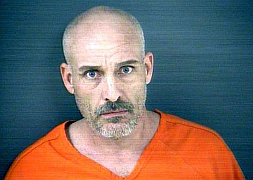 Saturday, February 2nd, at approximately 3:00 a.m., the Indiana State Police was called to Indiana Health Hospital in Knox to conduct an investigation into the death of an inmate.

The initial investigation by Indiana State Police Detective Brian Kubiak revealed that during processing into the jail, Steven Richie, 41 of North Judson, removed a clear plastic baggie, from his pants pocket, containing an unknown white chalky substance inside, and put it into his mouth.  Jail staff tried to unsuccessfully keep Richie from swallowing it.

Richie was then taken to IU Health Hospital in Knox where he was later cleared by medical staff to return to the jail.  After being booked and under close observation, jail staff became alarmed at Richie’s erratic behavior. Jail staff and a North Judson police officer were attempting to get Richie (who was conscious and awake) from his cell to go back to the hospital for another assessment when he became lethargic, his breathing became shallow, then stopped.

They immediately provided him with medical treatment and called an ambulance.  Lifesaving attempts were also performed by medics in the ambulance but were unsuccessful.  Richie was pronounced deceased at IU Hospital.

An autopsy was performed which showed no trauma.  Toxicology results are pending at this time and could take several weeks.

Richie was arrested for Driving While Suspended and a warrant out of Marshall County for resisting Law Enforcement.

Richie’s family was notified and the investigation is ongoing.

Picture is of Steven Richie