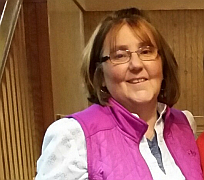 A graduate from Purdue North Central Budd received a degree in Applied Science in Nursing in December 1980 and her RN license in 1981.  She started working in the ER at Porter Memorial Hospital in Valparaiso, took on additional responsibilities in the CCU and also worked as hospital Supervisor until 1990. Theresa also worked in ER and ambulatory care for St. Luke’s Hospital in Kansas City.  From 1998 to 2013 she worked at St. Joseph Regional Medical Center in Plymouth working in various departments such as CCU, Recovery Room and Hospital Supervisor.  Mrs. Budd obtained her BSN in December 2005, graduating in the Sigma Theta Tau Honor Society. She also worked 3 years at Community Hospital of Bremen both on the medical units and in the medical offices.

Since starting at the Health Department the end of January she has taken the 2 day class ICS 300 Intermediate ICS for Expanding Incidents and the Elected Official in Emergency Training workshop.

Budd said, “Healthcare Education is so important and included in my goals to become a CPR instructor to help more people in the county be able to provide CPR, which non-medical people are able to perform once trained.  I will also be providing Narcan Education (which is the administration of Narcan in a home setting for opioid overdose) and connect people with resources.”

Discussing her duties she said, “Another area I will be working on is updating the Emergency Management plan for the Health Department in Coordination with Clyde Avery the EMA director.”

Theresa Budd is married to Jim Budd.  He is employed by Marshall County Sheriff’s Office and Plymouth Fire and EMS. They have 2 grown children.