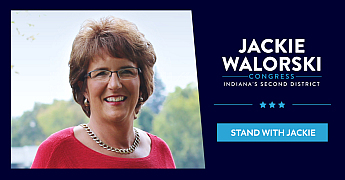 “As a lifelong Hoosier, I’m grateful every day for the opportunity to fight for the hardworking people of Indiana’s 2nd District,” Walorski said. “My fellow Hoosiers sent me to Congress to find commonsense solutions and stand up for our shared values. That’s why I’ve worked to cut taxes for working families, give our small businesses and farmers a better chance to thrive, get our veterans the care they deserve, and make sure our servicemembers have what they need to keep us safe. I look forward to talking with Hoosiers across the 2nd District about how we can continue working together to build a brighter future.”

Since first being elected to Congress in 2012, Jackie Walorski has worked to achieve bipartisan, commonsense solutions.

Jackie serves on the House Ways and Means Committee, which last year drafted historic tax cuts and reform legislation. The Tax Cuts and Jobs Act, which President Trump signed into law in December, cuts taxes for hardworking Hoosiers so they can keep more of their money and makes America more competitive so businesses can expand, create jobs, and raise wages.

As part of her work to strengthen our national security, Jackie opposed former President Obama’s efforts to close the terrorist detention facility at Guantanamo Bay, working to ensure the annual defense bill kept in place prohibitions on moving detainees to U.S. soil or shutting down the facility. Congress successfully blocked attempts to close Gitmo, and President Trump recently signed an order reversing the Obama administration’s policy.

Our servicemembers and veterans have risked their lives to defend our nation, and Jackie has fought to keep our promises to these brave men and women. In the wake of the 2014 veteran wait time scandal, the House passed her legislation to require VA facilities to stop waiving its scheduling guidelines. In 2016, legislation she authored to protect veterans from overprescribing of opioids was included in a bipartisan law to address the opioid epidemic. And in 2013, Jackie authored a bipartisan law that protects survivors of military sexual assault.