McFarland Files for Re-election to Bourbon Town Board 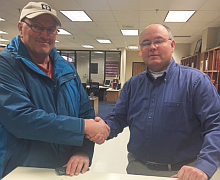 Les McFarland is a 28-year resident of Bourbon.  He has two children, Megan, age 17 and Molly, age 15 that attend Triton High School.   Les is a Sergeant with the Marshall County Sheriff’s Department and has been employed there for 23 years.

As an eight (8) year veteran of the Bourbon Town Council, he has been instrumental in moving forward progressive efforts to enhance the community services and public infrastructure, played a pivotal role in attracting Indiana Composites 2015 and grow existing business by supporting tax abatement authorization(s).  His goal is focused….he supports growing the community by attracting new residents and improving the quality of life in the area.  He has a proven record on supporting economic development and believes that solid planning and execution of a plan will build a better Bourbon. He explains that housing, infrastructure (roads / sidewalks) and economic development is a vital vision and concern that he will continue to grow in the Town.

Pictured above is Kevin Overmyer (left), President of the Marshall County Commissioners, is supporting Les McFarland while he files his intentions.