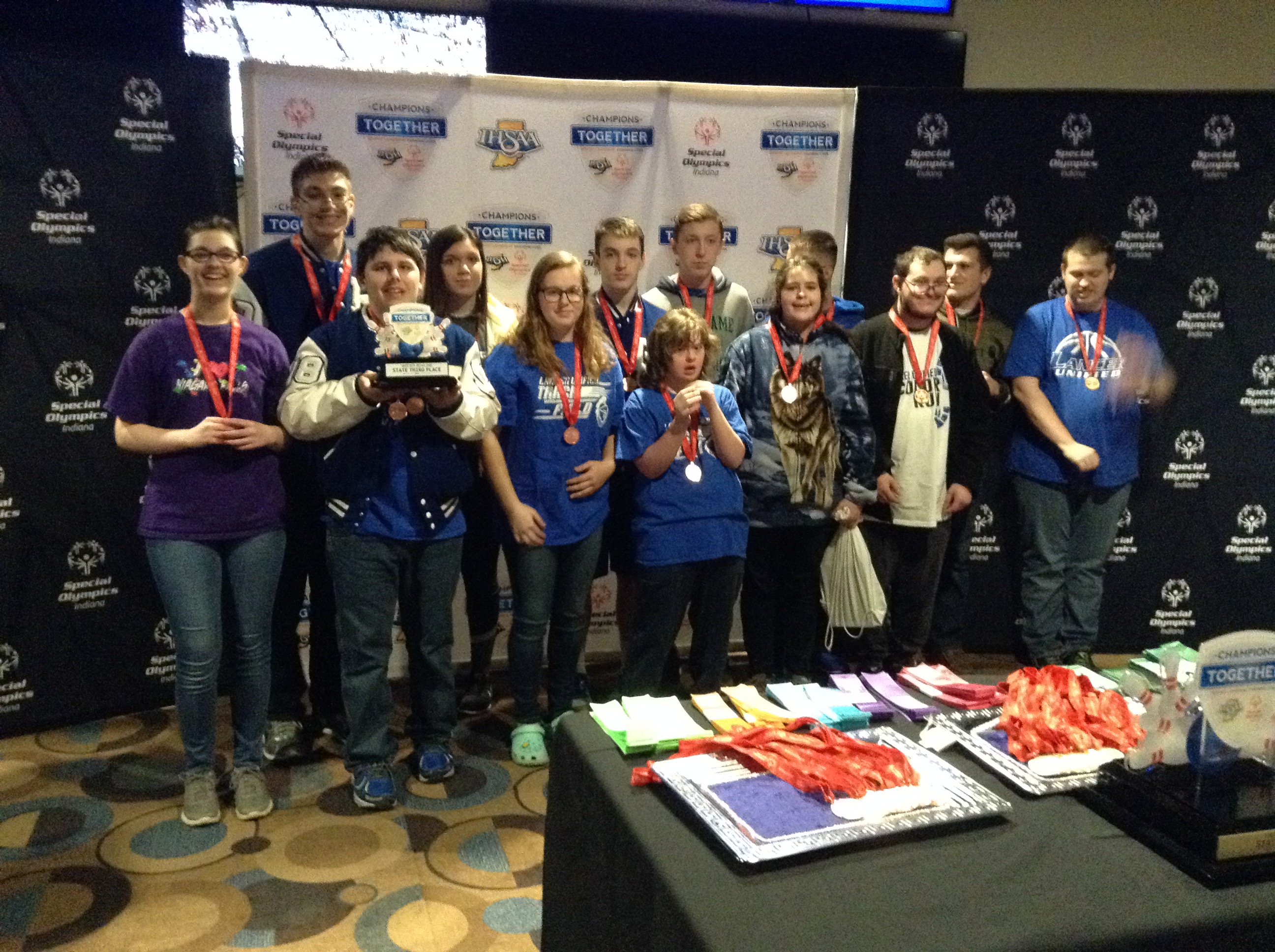 INDIANAPOLIS, IN. – LaVille’s Unified bowling team participated in the first-ever Indiana State Unified Bowling Tournament.
The Lancers were in tough competition with 13 other schools for one of the three trophies and medals. Based on total points, LaVille finished tied for third place with Noblesville. Fishers High School won the state championship and Elwood High School finished second.
The Lancers amassed 1,110 points, just 160 points from being a state champion.
“We had three teams – boys, girls, and coed – consisting of nine student athletes (special ed) and six student partners (general ed),” said coach Tammie Radican. “Each team bowled five games, Baker style, and total points determined placement. About two-thirds of the way through the competition, I started looking at total points of the other teams and doing the mental math. I cautiously realized we had the potential to take a trophy.
“Ironically, before the tournament began, Leyton (Czarnecki) and Ayden (Doyle) came to me asking if they were to bowl to win or hold back,” continued Radican. “Of course, I said to win. They started passing out awards with the lowest score out of 14 teams.”
As the final rankings were read off, the tension and drama mounted for the final four teams.
“We got to team five and I knew we were in the top four and just had to make it one more position,” explained Radican. “I also knew about how many total points we had (approximately 1110). My students didn’t realize what was going on in my mind, but Jackson’s (Groves) parents and my student partners were all aware and when they said there was a tie for third my hands were shaking and of course the partners understood but it wasn’t until they said ‘LaVille’ that my students began jumping up and down. My new student Seth (LeCount) hugged me calling out, ‘We won!’ It was magic. Then of course they get awarded medals, photos, and the trophy. Everyone wanting to hold it.”
It was a truly special time for coach Radican and the 14 LaVille students that made the trek to Indianapolis.
“It is unbelievable how moments like this can affect a person,” said Radican. “So often we take for granted success but for students with a disability, success is often hard to come by. They went, bowled, and had a whole lot of fun and in many ways just considered themselves winners to be there. A ribbon made them a winner.”
“However, when your school is awarded a trophy and you have a medal around your neck, the look of pride they have in that moment is something that can’t be captured,” continued Radican. “Furthermore, watching the student partners is equally if not more gratifying because I can witness a transformation almost. They are excited to see the student athletes excited and I believe that they get a deeper understanding of what Unified Sports is all about – building relationships and breaking down barriers. We all come together as one, competing together and by the end of the day you have new friends. You see kids hugging, laughing, helping each other and unlikely pairings in the typical school setting are now forming friendships.”
It is more than just bowling for these kids now.
“I guarantee you that there will be ‘hellos’ and ‘hi- fives’ in the hallways that didn’t take place before,” exclaimed Radican. “This is the second time we have placed in a state championship (BOCCE 2016) and to think this little rural school can compete against powerhouses such as Carmel and Fishers speaks to me of the heart we have at LaVille. With that kind of heart, we can move mountains and make great change in our school and the lives of all students.”