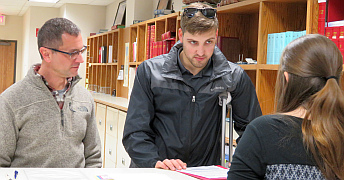 Tuesday morning another republican filed his intentions to fill a seat on the Argos Town Council.

Dylan Colburn would like to fill one of the two seats open on the Argos Town Council.  A lifelong resident of Argos, Dylan spend 6 years in the U.S. Army, married his high school sweetheart, Latisha Shepherd and they have two children.

Currently Mr. Colburn works in the IT Department at Culver Academies.

This is his first go a politics although he did serve one year on the Argos Redevelopment Commission being appointed by the Argos Town Council.

When asked if there were issues that drove him to run for a Town Council seat he said, “I just want to stay involved and make our community a little bit better.”

There are two seats open for this year’s election; they are currently being held by Suzanne Umbaugh and George Null.  A third seat is open on the Argos Town Council right now because Juli Stauffer moved outside of the city and had to resign her position.  Her seat could be filled by the Republican Party Chairman David Holmes according to Argos Clerk Treasurer Lisa Mullane