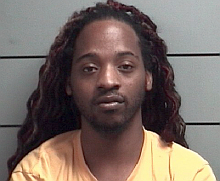 At 3:25 Officer Wozniak initiated a traffic stop on a silver 2012 Chevrolet Malibu for exceeding the posted speed limit on US 30 at Queen Road.

The driver of the vehicle, 24 year old Laquin D. Carter of New Jersey, gave the officer two false names before an ID was located in the vehicle.

Carter was found to be operating a vehicle without ever receiving a driver`s license and he was in possession of marijuana.

Laquin Carter was taken to the jail for operating a vehicle without ever receiving a driver`s license, false informing and possession of marijuana. He was held on a $1,500 cash bond.