Traffic Stop at Red-D-Mart Lands 2 in the MCJ 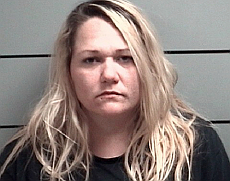 On Monday, January 29th, at 2:40 in the morning, Marshall County Officer Wozniak initiated a traffic stop on Michigan Street at Jackson Street on a green 1999 Chrysler vehicle.

The vehicle did not stop, but slowed and continued to 422 North Michigan Street, Red-D-Mart in downtown Plymouth.

The driver of the vehicle, 29 year old Tearney R. Janssen of Osceola was found to be operating a vehicle with a lifetime suspension and was she was in possession of marijuana.

A passenger in the vehicle, 32 year old James P. Rohwer also of Osceola was found to have an outstanding warrant through Marshall County.

Tearney Janssen was transported to the Marshall County Jail for operating a vehicle with a lifetime suspension and possession of marijuana. She was held on a $1,500 cash bond.

James Rohwer was booked into the jail for the warrant and held with no bond.