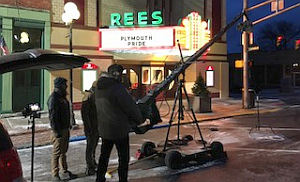 A film crew from Indianapolis was present in Plymouth on Tuesday afternoon into the evening filming a commercial for NIPSCO.

In April the REES Theatre Project Committee announced NIPSCO had agreed to retrofit the theatre’s marquee with energy-efficient LED light bulbs at no cost, becoming the theatre’s first corporate partner.

NIPSCO filmed here and two other locations in northern Indiana, which will be highlighted in their commercial to be aired sometime later. Randy and Eleanor Danielson were filmed with some extras outside the theatre. The REES marquee is the hero in this commercial.

And that’s a wrap.