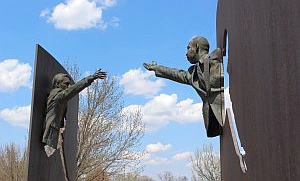 The Kennedy-King Establishment Act of 2018 (S.2332), recognizes the importance of Robert F. Kennedy’s speech in Indianapolis following the assassination of Dr. Martin Luther King, Jr. Nearly 50 years ago, Kennedy informed a large gathering of the death of Dr. King in a manner that called for a nonviolent reaction. As a result, while many other cities erupted in violence and rioting following Dr. King’s assassination, Indianapolis did not suffer riots or bloodshed.

Donnelly said, “Establishing the Kennedy-King Memorial and Park as a National Historic Site is an important step in recognizing the actions and ideals of Senator Kennedy and Dr. Martin Luther King, but also to highlight the continued efforts in the community to celebrate diversity and equality as source of strength for America. I’m proud to work with my colleagues on this effort.”

Young said, “Fifty years ago, when Dr. Martin Luther King was tragically and senselessly murdered, Robert Kennedy helped our nation heal right here in Indianapolis. As our country continues to struggle with issues of race and diversity, it is right and appropriate for Kennedy-King Park to gain this national designation.”

Congressman André Carson (IN-7) and Congresswoman Susan W. Brooks (IN-5) introduced companion legislation in the House, H.R. 4851. Additionally, the full Indiana delegation, led by Congressman Carson, sent a letter to Department of Interior Secretary Ryan Zinke asking him to designate the site as a National Historic Landmark.

To view the letter to Secretary Zinke, click here.