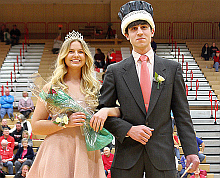 The 2018 PHS Basketball Homecoming King and Queen were announced and crowned Friday, January 19 at the Plymouth vs. Wawasee game during halftime of the varsity game. Senior Summer M. Smith was chosen as this year’s Queen and senior Trevor Pletcher was crowned this year’s King.

Summer is the daughter of Cameron Smith and Autumn Smith. She is a member of the PHS girls soccer, swimming, and softball teams. She is also a member of National Honor Society, Key Club, Multicultural Club, The PHS Riley Dance Marathon, and LEAD. After graduation Summer plans to attend Purdue University to major in speech pathology or audiology.

Pletcher is the son of Tim and Tisha Pletcher. He is involved in acting, Crimson Connection, and Future Farmers of America. He is president of the Interact Club and the Jr. Leader, as well as the 4-H club. He is a member of the Key Club, National Honor Society, Bridge Bust, Speech team, the PHS Dance Marathon, Business Professionals of America and he is the class president. Trevor plans to attend a 4-year university to study education, theatre, or architecture. He plans to stay in Indiana for college but he hasn’t narrowed down his choice on what college he will attend. 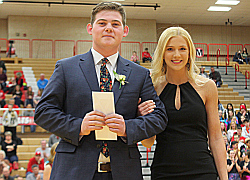 Levi is a member of the Crimson Connection, PHS Speech & Debate Team, Improv Club, Advanced Acting, National Honor Society and he is the vice president of the junior class.