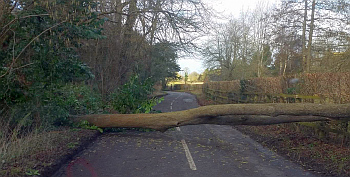 During Wednesday’s What’s Your Opinion Show on WTCA, Marshall County Commissioner Mike Delp mentioned a couple of possible vandalisms acts in the southern part of the county.

Delp said on two separate occasions trees had been felled across the county road with much of the debris left on the driving surface.

Jason Peters also confirmed the situations saying one cut the trunk out of the tree and left the top while the other was just a tree deliberately dropped on the road.

Marshall County Sheriff Matt Hassel said his department had been contact on January 17th by the County Highway who reported that on January 12th at Olive Trail and 16th Roads and again on January 15th at Peach and 15B Roads someone cut a tree down and left parts of the tree in the road.

The sheriff said no case report has been drawn on either incident.  He did urge citizens who may be driving on some of the county’s back roads to slow down a bit and if you see something suspicious to please contact the Marshall County Sheriff’s Department or your local police.