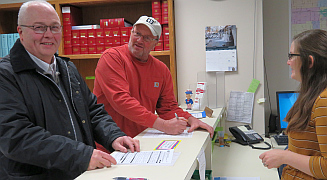 Hostetler is a lifetime resident of Polk Township and has worked most of his career in the area. He spent 11 years as part of the management team at U.S. Granules and is currently in his 30th year at Opta Minerals in Walkerton, currently the Plant Manager.

While he is still working full-time, he operates a small farm and raises Angus beef cattle.

Dave Hostetler served 8 years on the John Glenn School Board and 4 years on the Polk Township Advisory Board so he has some experience with politics.

When asked why he decide to throw his hat into the ring he said he thought there needed to be a bigger prospective at operating with such a large budget.  He also noted that county government has some “unique challenges.”  He said, “I want to be challenged and I want to dig in and help the county.”

When asked about the amount of time it takes to be a commissioner, Mr. Hostetler said he knows it’s more than a couple of meetings each month.  He said he has the flexibility to be available to work for the county when he is needed.

Photo: Marshall County Commissioner Kevin Overmyer is also shown in the photo.  He was filing his candidacy to be a State Convention Delegate on the Republican ticket.  Jaley Schinbeckler is the Voter Registration Deputy assisting with filings.