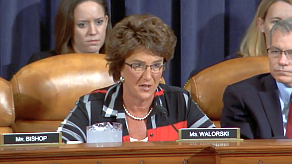 U.S. Rep. Jackie Walorski (R-Ind.) Wednesday questioned officials from the Department of Health and Human Services (HHS) and the Centers for Medicare and Medicaid Services (CMS) about efforts to identify and prevent fraudulent prescribing practices that fuel the opioid crisis.

“Like so many other parts of the country, the opioid epidemic has affected my district in Indiana,” Congresswoman Walorski said. “It has destroyed lives, torn apart families, and put stress on first responders, hospitals, the foster care system, and other vital community institutions. Unfortunately, last year a dear friend of mine, a doctor in my district, was murdered for refusing to prescribe opioids.”

At a House Ways and Means Oversight Subcommittee hearing, entitled “The Opioid Crisis: The Current Landscape and CMS Actions to Prevent Opioid Misuse,” Walorski asked Gary Cantrell, Deputy Inspector General for Investigations in the HHS Office of the Inspector General, about how problematic prescribers are identified and what actions are taken as a result.

At a previous Ways and Means hearing, Walorski questioned Medicare’s top fraud prevention official about how safeguards failed to prevent a doctor in Indiana from prescribing more than $1 million in opioids to 108 patients under Medicare’s prescription drug program.

A transcript of the exchange is below.

REP. WALORSKI: Like so many other parts of the country, the opioid epidemic has affected my district in Indiana. It has destroyed lives, torn apart families, and put stress on first responders, hospitals, the foster care system, and other vital community institutions.  Unfortunately last year, a dear friend of mine, a doctor in my district, was murdered for refusing to prescribe opioids.

Opioids come in many forms: pills, heroin, the emerging threat of fentanyl, and others. Unfortunately, this means that there are too many fronts in the fight. Mr. Cantrell, I wanted to just ask you, identifying overprescribing by providers is incredibly important. However, examining at-risk beneficiaries can also help identify providers who are potentially overprescribing. The Inspector General identified in my state, Indiana, a “prescriber that wrote an average of 24 opioid prescriptions each for 108 beneficiaries who received extreme amounts.”

Can you talk about your approach to identifying potentially problematic prescribers? And then also, once these prescribers are identified, what happens?

MR. CANTRELL: Yes, thank you. First of all, in our data brief we used an analysis approach that we hadn’t previously utilized. We wanted to first focus on the beneficiaries who were at greatest risk of harm, because of the volume of opioids they were receiving. And instead of just looking at the universal claims, we looked then at the prescribers who were prescribing specifically to a high number of those at-risk beneficiaries. So that led us to, in our report, 400 different prescribers who were prescribing either to a large number of doctor-shopping Medicare beneficiaries or to a large number of patients receiving high amounts of opioids.

So when we have this analysis, we use this data. First we report on these results so that we can inform the public. We share this information with CMS so they can begin engaging in administrative or other review to monitor these prescribers. And we refer many of these out to our field offices, to our partners at the Department of Justice, for criminal investigation.

Now with 400 identified, it isn’t necessarily the case that all are committing fraud. So we sift through the data to identify those that appear most likely to be committing fraud. Send them out to the field. Then ultimately it takes the boots on the ground to investigate these matters and bring individuals to justice who have committed this fraud. And so it’s very intensive work. We work closely with DEA, FBI, state agencies, and local law enforcement. This is a huge priority for us to bring individuals to justice who are prescribing in the Medicare and Medicaid space these opioids illegally.

REP. WALORSKI: Just as a follow-up, I’ve heard from doctors in my district who would like to have access to more data so they know and are a little bit less at risk of falling into some kind of a doctor-shopping network. Can you talk about ways you believe we can improve data sharing to combat opioid abuse? Are then there ways to improve data sharing really just while working within state privacy laws as well?

MR. CANTRELL: Well first of all, we certainly encourage the utilization of Prescription Drug Monitoring Programs in every state. We believe these are an important tool. For us, we see Medicare claims data, we have great visibility there. We have a little less, slightly less, but some visibility in Medicaid, but we don’t see cash-based transactions and other transactions like that which the PDMPs would include. And so we think it’s vitally important for prescribers and pharmacies to check these PDMPs to make sure they’re not dispensing to doctor-shopping patients. And we look for other ways to share this information across both the federal government and the states and with the private sector.

One of the things I think we’ve done that’s most important is share their approach to this analysis, but also the underlying data with our private sector program integrity partners, who we work with through the Healthcare Fraud Prevention Partnership and the National Healthcare Anti-Fraud Association. So they’re empowered to conduct their own analysis, monitor these individuals, and hopefully have a broader impact.

MS. BRANDT: Yes, as I mentioned in my oral testimony, we are working to increase access to medication-assisted treatments and are looking and working with the CDC and other partners.

REP. WALORSKI: On a scale of one to 10, where are we in looking? What have we found? What are we doing?

MS. BRANDT: We have done a number of stakeholder listening sessions over the past fall where we got a lot of valuable input. We have been having meetings with NIH, CDC, and others. So, I would say we probably are at about a six, we have more to do but we are definitely in the right direction.