Geraldine Whitfield Sentenced to 9 Years for Dealing in Methamphetamine 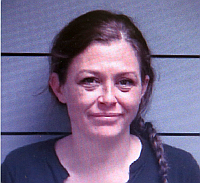 Geraldine Whitfield, 44, of Rochester, Indiana, was sentenced by agreement on January 17, in Marshall Superior Court No. 1 to a total of 9 years imprisonment with 7 of the years calling for incarceration at the Indiana Department of Correction followed by 2 years of reporting probation.  The agreed-upon sentence was entered in exchange for Whitfield pleading guilty to one count of Possession of Methamphetamine as a Level 3 Felony.  Additionally, the State agreed to dismiss a misdemeanor count of Possession of a Controlled Substance.  Judge Robert O. Bowen approved the agreement between Chief Deputy Prosecuting Attorney Tami Napier and defense attorney Tom Black.

In open court, Whitfield admitted that on February 5, 2017, Deputy Brandon Cooper of the Marshall County Sheriff’s Department was on routine patrol in the area of southbound US 31 and 14th Road when he observed erratic driving behavior in a maroon minivan.  Whitfield was a passenger and the owner of the vehicle.   The driver was unlicensed but indicated he was driving due to Whitfield’s intoxication.  The minivan was towed from the scene after Whitfield’s and the driver’s arrest.

Thirty-one (31) grams of methamphetamine was located on Whitfield in a search incident to her arrest.

Prosecuting Attorney Nelson Chipman was pleased with the outstanding work of Deputy Brandon Cooper.  Prosecutor Chipman stated that methamphetamine abuse accounts for a significant amount of drug abuse, overdoses and property crimes so it is critically important to uncover and prosecute these cases.  And 31 grams of the substance is not an inconsequential amount.

“Methamphetamine is a drug that destroys families and communities.  The prosecution of methamphetamine dealing and possession in Marshall County is a priority of my office and will remain so until it is clear to dealers and users alike that it will simply not be tolerated in our community.”